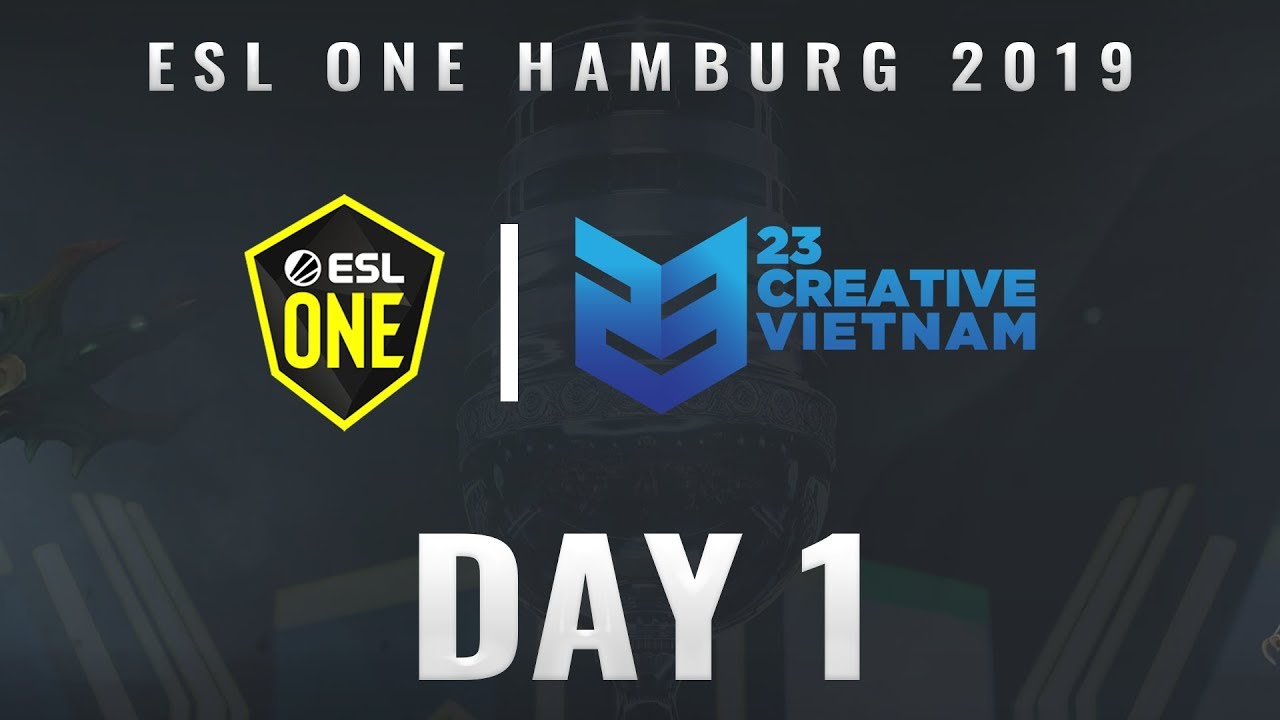 With a great conclusion to the DreamLeague Season 12, it’s now time for the 2019 ESL One: Hamburg to grab our attention. A $300K USD prize pool is up for grabs and the top 12 teams from around the world will give it their all, when they go to head to head against each other, to win the top prize. The twelve teams are split into two groups of six teams each. Every series is played in a Bo2 format. Let’s quickly recap the important highlights of Group Stage matches that have taken place over the past 2 days.

What an insane fight between @virtuspro and @VICI! Looks like there's still all to play for! 💪

The Chinese claimed victory over the first game between the two giants. It was very much a one sided match where Vici was dominating all throughout, sparing no chance for Virtus Pro to make a comeback. VP tried to pin their hopes on Omknight, but he proved no match against Zeng “Ori” Jiaoyang’s Sniper.

Having put VP under pressure in game 1, Vici also had a strong start in 2nd Game Two. They manged to gain an early lead with their Huskar, who then went on a rampage, snowballing out of control. With no way to contain this hero, the CIS team found themselves at their wits’ end and could do all but accept defeat, call GG and move on to work on the second series of the day.

Second series is live and ready!💪https://t.co/EbnkSdye78

Alliance squad absolutely anhilated their opponent team in Game One, in all of just 24 minutes! Vikin.gg however put up a great fight and showed their mighty adversary they will not be so easily beaten. They played well in Game Two, scoring a victory and reminded all why they deserve to be in this tournament in the first place. This thrilling series ended in a draw.

Scary start but the greed pays off just in time to seal the deal versus Team Liquid! We start off #ESL One Hamburg on the right foot!#SummonYourStrength pic.twitter.com/FpTlCCPwEH

TNC scored a win in Game One, after a splendid laning stage. This provided them with a very solid start, Their strategy was to build a draft which would be strong during mid-game stage and they successfully made use of it. In Game 2, Liquid managed to secure an early lead against TNC’s extremely impatient and greedy line-up. However, they couldn’t perform well in the mining, which enabled the SEA squad to gain an advantage over the NA squad. There came a time, when TNC’s 2 cores were overwhelmingly strong for TL to handle and TNC scored a decisive 2-0 win over Liquid.

Quincy Crew made a surprising forfeit against Ninjas in Pyjamas in first Series owing to CCnC falling seriously ill and being hospitalised. They however, returned to play against Gambit Esports with a stand-In player for CCnC.

Even though Sumail “SumaiL” Hassan is no longer a part of QC, he still participated in this series as a stand-in for CCnC. Both teams were evenly matched for majority of Game One. Neither side could make promising moves on the other or exploit any significant advantages. An intense teamfight turned the tides in favor of Gambit, shifting the balance of power. This resulted in Gambit winning Game 1.

Gambit oddly, picked Techies in Game 2. This worked as Gambit’s element of surprise against QC throwing them off-guard and resulted in Gambit acquiring an early advantage. The NA side however countered Gambit’s move with a Drow-based lineup, which kept up with regards to the farm. Both sides were again evenly matched, however, one slip-up by Gambit against the drow line-up cost them victory in Game 2 – a Gambit hero died in vain. This gave Quincy Crew a good opening to push through and they fully exploited the advantage. 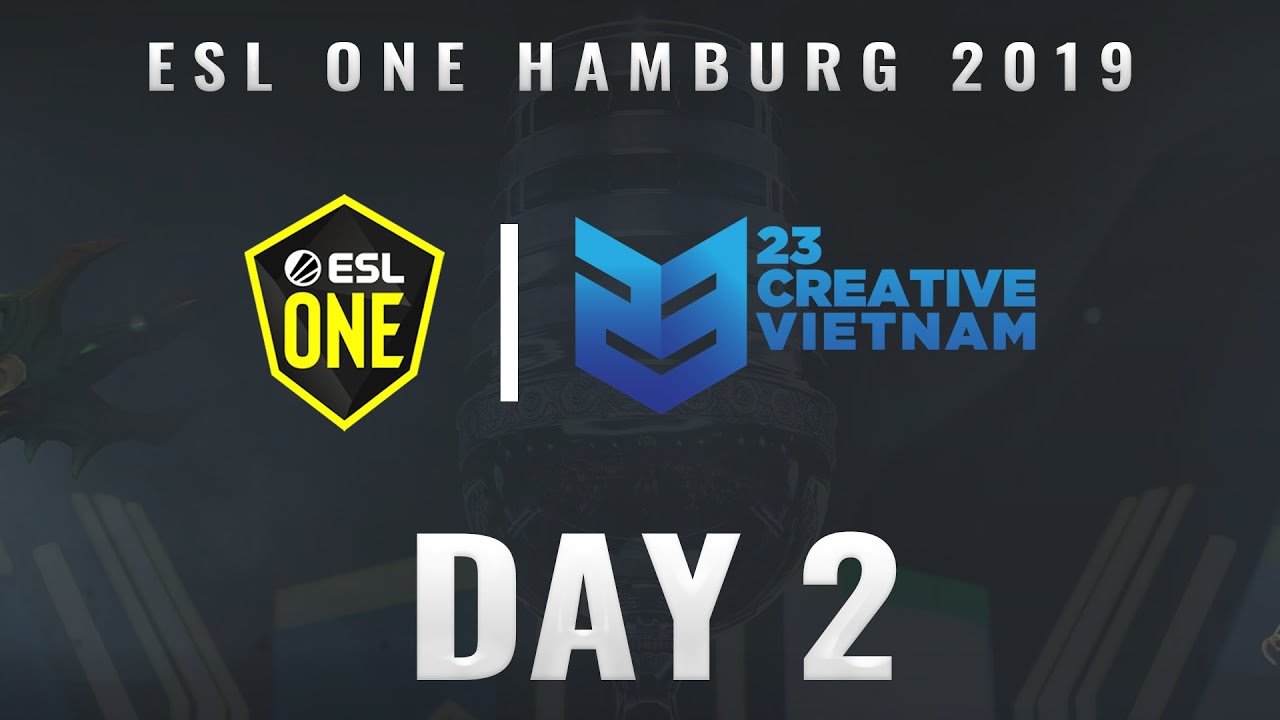 There were bloodbaths, dogfights and surprising comebacks galore across both groups, as our twelve teams battled it out for a chance to take home a portion of the $300K USD prize pool.

The second stage of Bo2’s gave some quality Dota action to feast one’s eyes upon. Here’s a look at some of the highlights of the day. 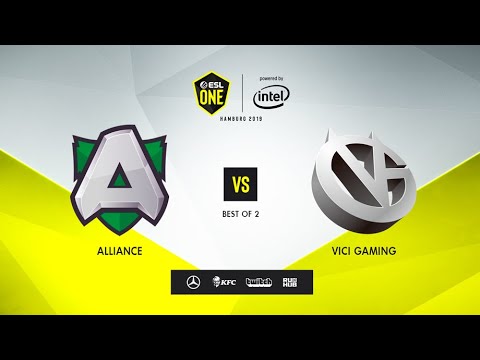 The clash of these Group A Titans saw plenty of kills and nail biting back-and-forth action.

Vici started off strong in Game one they built up a strong net worth lead in the early stage. By the twenty-minute mark, Vici kicked their game up a notch with Eurus/Papparazi stealing the show with his Gyrocopter pick.

Even with a commendable fight back, Alliance couldn’t keep Vici owning this game. They shut Alliance down in 52 minutes with a 12-kill lead.

Alliance made a good come back in Game 2, showing good confidence in their gameplay. They dominated the laning phase. Towards the 20-minute mark however, their confidence faltered and the squad began to play shakily. Vici wasted no time in exploiting this opportunity and clutched control over the gold advantage from Alliance.

It wasn’t long before Alliance grew impatient and decided not to stretch the game much longer. At 27-minute mark they took on Vici in a nice team fight around the river. Alliance seized the lead again and made full use of their new advantage. The next seven minutes saw stomp for Alliance dominating the competition as they slayed champion after champion of Vici Gaming. The final score at 34-minutes was 42-kills to 14. A crushing defeat for Vici.

Game one of this series saw Beastcoast curb stomping VP. Virtus.Pro may have gotten first blood and held on to the kill-lead in the early game, but Beastcoast had control over the game by the 15-minute mark. By 19-minutes, they had chopped VP’s kill lead by more than half.

Beastcoast took on Roshan at 22-minutes and Chris Luck picked up the Aegis. They ended the game in the next four minutes, winning Game 1. They ended game one in 26 minutes, with 22-kills to VP’s 19.

Despite delivering a strong performance in game two, the new Virtus.Pro line up couldn’t do a lot to improve upon their gameplay from Game 1. A lot of back and forth occurred between the two sides during the early game. With 15-minutes in, Beastcoast had again found themselves on solid ground. Hector’s Bloodseeker pick played a pivotal role in enabling his team to keep up the tempo and make a hard push through VP’s strong defence. He scored the most number of kills across both games as well, a total of 24.

After 38-minutes, Beastcoast breached VP’s high ground and GG was called. They took the series 2–0. An upsetting result for Virtus.Pro fans.

With two sweeps done, Beastcoast are back into the green and are not in danger of being eliminated for now. If the team can win out on the final day of the group stage, they will secure a spot in the playoffs.

There were also saw some vicious stomps in Group B, and the Team Liquid vs Ninjas in Pyjamas series certainly fit the bill.

Liquid’s new line up kicked off Game one with a display of explosive energy. Despite that however, both sides were evenly matched during the lanes. Liquid cemented their lead in the gold and experience departments

At the 30-minute mark The kill score was 25–12. Micke’s Morphling and qojqva’s Razor were both overwhelming for NiP. Micke and qojqva had put up a whopping 17 & 16 on the scoreboard as they ended the game within 66 minutes, with the team total being 45 to NiP’s 34.

Game two saw NiP take a Vengeful Spirit last pick as their carry for oliver looked like it had potential in the early laning phase. The net worth swung back and forth through the first 20-minutes. But by the time Micke’s Sven was fully online at 21-minutes, NiP’s draft had no way of dealing with him. The next 10-minutes were another bloodbath. They ended the game at 31-minutes with a massive 41-kills on their side of the board. A fantastic performance for Liquid’s new roster.

Game one saw TNC stomping on Quincy for victory. QC have going through some tough times of late and are having trouble setting up a fixed roster ahead of the commencement of the new season.

TNC took drew first blood and pulverised the laning phase, setting up a dominating lead for themselves. They had a 23k net worth lead by 23 minutes, when QC had barely managed to put up some kills on the scoreboard. The final score was 23–7 by 25-minutes and GG was announced. TNC.Predator seized Game 1 victory.

TNC selected an interesting draft for game two. With Gabbi placed in the safe lane on Nightstalker. However, it didn’t seem to be going as planned and expected during the lanes.

Quincy Crew raked in a net worth of 8k at 18-minutes and TNC could only secure two kills to Quincy’s nineteen.

The game took a turn for the better for TNC when Gabbi finally got his Aghanim’s Scepter – his gameplay started to change. He hit a 15-kill count on his Nightstalker and ended up second in the overall net worth despite his underwhelming performance at the start.

Despite a promising start for Quincy, TNC took control of the game eventually. Ending game two at 37-minutes with anothe decisive 2–0 victory under their belt.

The fifth series of matches for both groups will take place on Oct. 24, beginning with VP taking on Alliance at 3:30pm UTC.